CNN: Doctors May Be 3rd Leading Cause of Death in U.S.

CNN News Media echoes the same facts and figures quoted by many medical news services on the internet.  Included are Dr Mercola’s site, US-NEWS.COM and CONSUMERREPORTS.ORG. 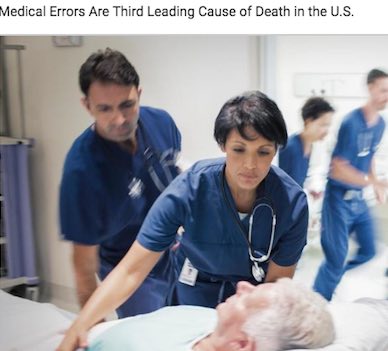 (CNN) You’ve heard those hospital horror stories where the surgeon removes the wrong body part or operates on the wrong patient or accidentally leaves medical equipment in the person they were operating on.

Even scarier, perhaps, is a new study in the latest edition of BMJ suggesting most medical errors go unobserved, at least in the official record.
In fact, the study, from doctors at Johns Hopkins, suggests medical errors may kill more people than lower respiratory diseases like emphysema and bronchitis do. That would make these medical mistakes the third leading cause of death in the United States. That would place medical errors right behind heart disease and cancer.

Through their analysis of four other studies examining death rate information, the doctors estimate there are at least 251,454 deaths due to medical errors annually in the United States. The authors believe the number is actually much higher, as home and nursing home deaths are not counted in that total.

READ THE ENTIRE REPORT AT CNN.COM

This site uses Akismet to reduce spam. Learn how your comment data is processed.